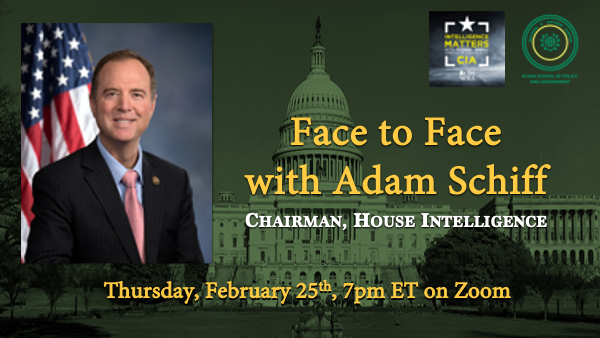 "I’m looking forward to joining the Hayden Center and engaging with students and future leaders in intelligence and national security studying at George Mason University and the Schar School."—U.S. Rep. Adam Schiff (D-Calif.)

U.S. Rep. Adam Schiff (D-Calif.), the Chairman of the House Intelligence Committee since 2015 who led the 2020 impeachment trial of former President Trump, joins Schar School Distinguished Visiting Professor and former Acting Director of the CIA Michael Morell in a conversation about the state of the U.S. intelligence community on Thursday, February 25.

The 7 p.m. ET virtual discussion, called “Face to Face with Adam Schiff” and hosted by the Michael V. Hayden Center for Intelligence, Policy, and International Security, is free and open to the public but registration is required.

Public conversations with key officials in Washington, D.C., are important to the student experience at the Schar School. “Getting a chance to bring voices like his to the students of the Schar School is why I set up the Hayden Center,” said the center’s namesake, former director of the CIA and National Security Agency Gen. (ret.) Michael V. Hayden.

“I met Adam Schiff when he joined the Intelligence Committee while I was director of the CIA,” he said. “I saw in him someone with whom we could engage in robust meaningful dialogue about the future of intelligence.”

For his part, Morell said, “I’m excited to have this conversation with Chairman Schiff. These are pivotal times for the U.S. Intelligence Community, and he and his committee play a critical role in determining priorities and ensuring that the American people have trust in the work of the men and women of the IC.”

Schar School fact: The Schar School is ranked No. 2 in the world for security studies programs (U.S. News & World Report, 2019).