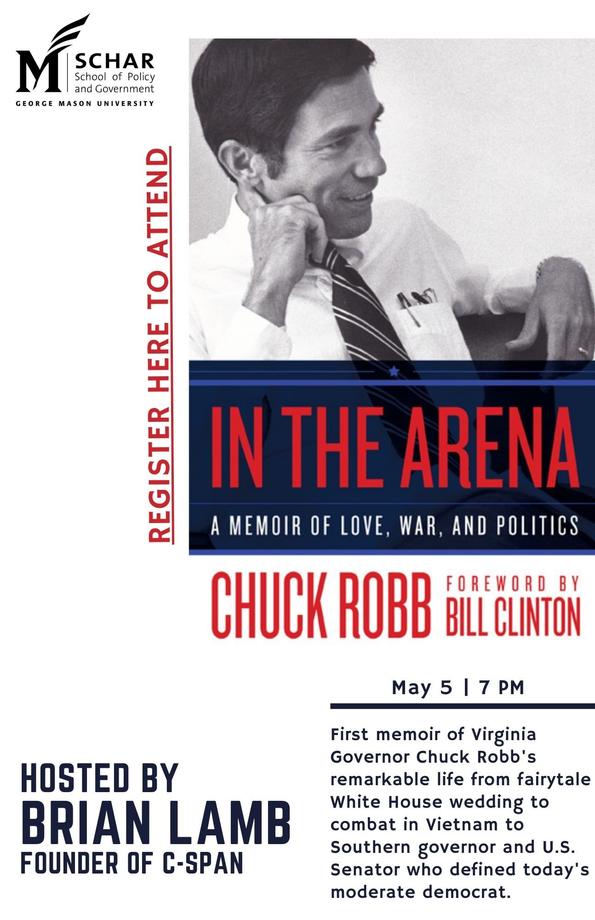 It might have taken 20 years after leaving elected office, but former Virginia governor and U.S. senator Chuck Robb (D) has finished his memoirs. The former Schar School distinguished visiting professor—he taught at the school from 2001 to 2010—will discuss the book, In the Arena: A Memoir of Love, War, and Politics (UVA Press), and his career in public service during a special Schar School appearance on Wednesday, May 5, at 7 p.m.

C-SPAN founder and former Booknotes host Brian Lamb will moderate the virtual discussion. The event is free and open to the public; registration is required: http://bit.ly/ScharRobb.

The book, Robb said in a recent Zoom call, is written the way he taught his classes: Without a syllabus and in the manner of “war stories.” “I used to represent anything I was going to say or do [in class] like Jack Webb from the TV show Dragnet: ‘Just the facts,’” he said.

Those facts encompass an entire generation of Virginia and national politics, beginning with his military service at the White House as a Marine Corps officer—where he famously met his future wife, Lynda Bird, the daughter of then-president Lyndon Johnson—and later as a battlefield officer in Vietnam.

His rise through Virginia politics is detailed frankly and unflinchingly, taking in his sometimes-bruising inter-party skirmishes and his exhaustive search “to find an electable candidate” for his senate seat in 2000 when he knew “this was going to be my last tour,” he said. “Credible candidates,” he said, had reasons for not running “and I didn’t want to put somebody in there to be a sacrificial lamb by encouraging someone to do it. I decided I was going to have to do it myself. (He eventually lost to Republican George Allen.)

The senate’s loss was the Schar School’s gain. As a distinguished visiting professor, Robb and his wife opened their home’s doors many times for faculty and staff celebrations. It’s a relationship that continues to this day.