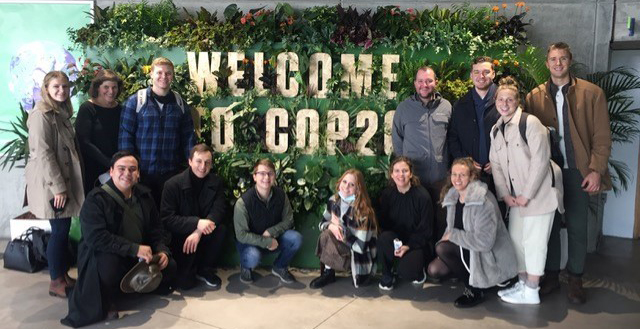 For four days in November 2021, eight students from the Schar School of Policy and Government attended COP26, the world’s largest global climate conference, in Glasgow, Scotland.*

The trip, part of the Schar School summer course, Climate Policy: A Global Transdisciplinary Approach for the Future, allowed students the opportunity to meet with delegates, negotiators, youth activists, and indigenous groups at the conference. While there, Schar students received a crash course in the complexities of climate change policy and negotiations.

“It was a really great experience getting to see the general process of COP, but also various types of stakeholders that come to the table and how they interact,” said Mason senior Conner Cuevo.

The quick jaunt packed a lot of punch, inspiring in Cuevo a passion for how government and international institutions like the U.N. work and how they can solve global issues.

“It has given me a wealth of experiences to draw from and an endless source of materials that I continue to reference and apply to my classes, and even outside of class,” he said.

His network also expanded: “When you’re in a small group like that, you make a lot of friends.”

Schar School and other George Mason University students enrolled in the 3-credit virtual study abroad “Climate Policy” course figuratively “travel” the planet, studying global challenges with experiential learning opportunities and collaboration on a group project with students from the University of Rwanda.

The class features TED-style talks from 20 guest speakers from 18 different countries, including Ma Jun, the top Chinese environmental activist and is one of TIME magazine’s most influential 100 people, and Erik Solheim, a former head of the UN Environmental Program.

“The level, the number, and backgrounds of all speakers that came to class really gave a well-rounded viewpoint,” said Schar School senior Jake Mazzoccoli, who took the class and the trip to Scotland.

For Mazzaccoli, the most interesting event at COP26 was a private session hosted by the Norwegian Africa Business Association (NABA) that featured top negotiators and policy makers from Africa, as well as experts from KPMG. Through a collaboration with NABA, the students helped craft a white paper that resulted from the session, which was moderated by Carol Pineau, a journalist and senior fellow at the Schar School.

Attending COP26 really opened his eyes, Mazzoccoli said, and showed him why things don’t move as quickly as he and others hoped.

“COP is the center of the issue, but it’s frustrating because it’s often just words on paper. It really lit a fire under me,” he said. “I didn’t really understand the complexity and sensitive nature. The problems aren’t simple. You can’t just go over there and fix it.”

But the class offered him a way forward, as he heard about issues directly from their sources and made contacts with high-level officials.

“Climate Policy: A Global Transdisciplinary Approach for the Future” will be taught again in fall 2022, with an in-person visit planned to COP, held this year in Egypt. For more information on the Schar School’s study abroad classes, visit abroad.gmu.edu.

*Students followed numerous COVID-19 protocols, including vaccinations, boosters, and testing before and after travel.