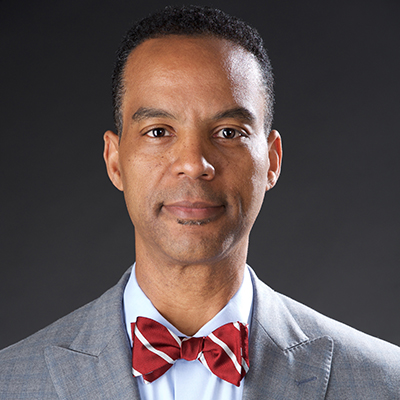 Michael K. Fauntroy is an associate professor of policy and government and the founding director of the Race, Politics, and Policy Center at George Mason University. He began his second stint at Mason in 2021 after eight years on the political science department faculty at Howard University, where he also served as acting director of the Ronald W. Walters Leadership and Public Policy Center. He previously served on the Mason faculty from 2002-13.

Prior to joining the faculty at Mason, he was an analyst in American national government at the Congressional Research Service (CRS). At CRS, he provided research and consultations for members and committees of Congress. He also served as a civil rights analyst at the U.S. Commission on Civil Rights, where he conducted research on voting rights, fair housing, and education policy.

Fauntroy is the author of two books. Republicans and the Black Vote, which analyzed the relationship between African American voters and the Republican Party. The book was a 2007 Foreword Magazine book of the year finalist in political science. He also authored Home Rule or House Rule? Congress and the Erosion of Local Governance in the District of Columbia. A third book, More Than Just Partisanship: Conservatism and Black Voter Suppression, is under contract with New York University Press. He has also published chapters in edited volumes and academic journals at the intersection of race and politics.

His essays and commentary have been published in the Huffington Post, the Washington Times, New York Daily News, the Black Commentator, and the Chicago Defender, among others. He is a widely cited scholar, having been quoted in the Washington Post, the New York Times Magazine, Newsday, USA Today, the New York Post, the Los Angeles Times, and the Boston Globe, among others. He is a regular television, radio, and podcast presence having appeared on virtually every major American national broadcast network. He is also an in-demand analyst on local television and radio outlets. He currently serves as U.S. politics analyst for CTV News in Canada and Canadian Broadcasting Corporation radio.