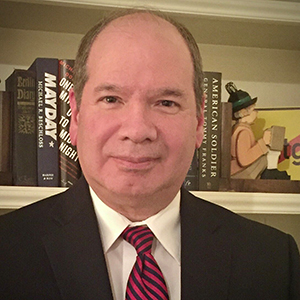 James P. Danoy is an adjunct faculty member at the Schar School of Policy and Government, where he teaches on the role of intelligence in national security. His areas of interest include intelligence collection and analysis; defense and security; Europe, Eurasia, and NATO; and violent extremism.

Danoy is a retired career intelligence officer from the U.S. Defense Intelligence Agency (DIA) where he worked in a variety of intelligence fields including geospatial intelligence, current and crisis intelligence, long-term research, policy support, and foreign intelligence relationships. His tours of duty included senior assignments in the Office of the Director of National Intelligence (ODNI), the Office of the Secretary of Defense, the Joint Chiefs of Staff, U.S. European Command (EUCOM), NATO, CIA, the FBI, and the White House. During 2010-11, Danoy served as the President’s Daily Brief (PDB) briefer to President Barack Obama.

Danoy is an alumnus of George Mason University and holds a bachelor’s degree in government and politics and a master’s degree in modern European history. He is a member of the Phi Alpha Theta international honor society in history and a nonresident senior fellow at the Atlantic Council. He is a Distinguished Graduate of the National Defense University, earning a master’s degree in national resource strategy. He also holds an associate in applied science degree in police science.