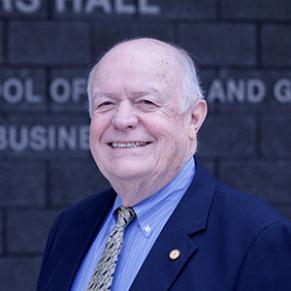 He served as dean of the School of Public Policy until July 2010. He also holds appointments in the departments of decision sciences, geography and public affairs. Haynes teaches classes in environmental system management, policy analysis, urban planning methodology, and regional economic development. His recent research activities have focused on minimum information forecasting and intelligent transportation systems. Research methodology has been related to risk assessment and decisions under conditions of uncertainty, mathematical programming applications, and the relationship between regional economic development, science, and technology policy and smart infrastructure on domestic and international competitiveness.

Haynes has been involved in regional economic development, environmental planning, and natural resource management since the early 1970s including projects in Montana’s Yellowstone Basin, the Lake Michigan and Ohio river regions of the U.S. Midwest, the Nile River-Lake Nasser regions of Egypt, the Sudan, and the Texas Gulf Coast. Using mathematical programming techniques for evaluating resources utilization for energy facility location and economic simulation for community water supply alternatives, he has been active in state resource assessment in New Jersey, Texas, Indiana, Massachusetts, and Virginia. He has directed international programs for the Ford Foundation’s Office of Resources and Environment and EPA.

Haynes has been involved in higher education management in Texas, Ohio, Indiana, Massachusetts, Georgia, and Virginia and in Canada, Malaysia, and Kuwait. He has conducted strategic planning for private organizations (e.g., Xerox, Exxon) and public organizations (e.g., in southwest Pennsylvania, Indianapolis, and Boston and the Kaohsiung Metropolitan Foundation).

Haynes was an originating member of the National Science Foundation’s Decision, Risk and Management Science Panel and its transportation and infrastructure initiatives. His monograph on university R&D infrastructure investment patterns in the U.S. was used for the New Agenda for Science program of Sigma Xi and the National Science Foundation’s infrastructure program. He was environmental chair for the International Exchange of Scholars, managing congressionally funded international scholar programs including the Fulbright exchanges. He served as a member of the board of the American Association for the Advancement of Science’s Social, Economic and Political Science Section. He was a governor, past president, and now fellow of the Western Regional Science Association and completed a two-year term as president of the 75-nation Regional Science Association International. He has served as editor and has been on the editorial board of more than a dozen international scholarly journals.

He received the Boyce Award in 1997 for his work in the Regional Science Association International, the Anderson Medal in 2000 for his activity in Applied Research, and the Ullman Award in 2003 in recognition of his contribution to transportation research. In 2002, he was elected to the National Academy of Public Administration. In 2006, he was elected a fellow of the Regional Science Association International, and also in 2006, he presented the ninth lecture for the UNESCO sponsored Megacities Foundation and the Netherlands Institute for City Innovation Studies on “Infrastructure: The Glue of Megacities” at The Hague. In 2007, he was awarded the ninth National Geographic Society’s President Gilbert H. Grosvenor Medal by Texas State University for his work in geographic education.

Previously, Haynes was professor of geography and public policy and chair of the Department of Geography at Boston University. At Indiana University, he was chair of the urban, regional analysis and planning faculty in the School of Public and Environmental Affairs, as well as director of the University’s Regional Economic Development Institute. At the University of Texas, Austin, he was a founding faculty member of the Lyndon B. Johnson School of Public Affairs, codirector of the West Texas Center for Environmental Studies and co-principal investigator of a four-year State of Texas/National Science Foundation study of the Texas Gulf Coast. He joined the University of Texas from McGill University, where he was a lecturer.