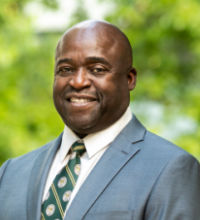 Office of the President

Gregory Washington became Mason’s eighth president on July 1, 2020, taking leadership of the largest and most diverse public university in Virginia, a Carnegie Tier 1 research institution, and a beacon of access for students of all backgrounds.

The former dean of the Henry Samueli School of Engineering at the University of California, Irvine (UCI), and former interim dean of the College of Engineering at Ohio State University, Washington immediately put his skills as a strategic and collaborative solutions-oriented leader to work to guide Mason’s successful management of the COVID-19 pandemic. Washington implemented a Safe Return to Campus Plan that included vigorous surveillance testing, including rapid-return saliva testing developed by Mason faculty. Mason partnered with local health districts to vaccinate 90,000 Virginians, including students, faculty and staff.

During Washington’s first year at Mason, student enrollment grew by 3.5% amid an average statewide decline of more than 8%. Sponsored research expenditures increased by 8% and Mason posted its third-highest fundraising year in the university’s history. In Spring 2021, Mason graduated its largest and most diverse class ever.

Three weeks into his tenure, Washington launched the Anti-Racism and Inclusive Excellence Task Force, whose recommendations will eradicate any practices and traditions of institutional racism at Mason while positioning the university as a national model for the advancement of anti-racism, reconciliation and healing. Mason has adopted the task force’s first set of 15 recommendations.

Washington has enhanced Mason’s commitment to access by creating new pathways. One is the Mason Virginia Promise, which expands Mason’s ADVANCE Program Partnership with Northern Virginia Community College to other community colleges throughout the state. Washington also has established dozens of public-private partnerships, among them the President’s Innovation Advisory Council, which brings together industry, local government, K-12 education, and non-governmental organizations to help plan and establish the Institute for Digital InnovAtion (IDIA) on the Arlington Campus.

Other highlights from Washington’s first year at Mason include completed construction on Horizon Hall, a state-of-the-art teaching and research facility in the heart of the Fairfax Campus, and approval for a Life Sciences and Engineering Building on Mason’s Science and Technology Campus in Prince William County.

In addition, Washington launched the Mason Innovation Commission, which convenes many of Mason’s most forward-thinking faculty, staff and administrators to make recommendations for the strategic direction of the university as it approaches its 50th anniversary as an independent institution. Washington’s Mason Talent Exchange initiative connects upskilling workers and employers.

In his seven years at UCI, Washington expanded undergraduate enrollment in the engineering school by 1,100 students and graduate enrollment by more than 200. He established the University of California’s first student makerspace and helped establish the OC STEM Initiative, one of the nation’s first STEM ecosystems, in Orange County, California, engaging more than 100,000 students.

Washington launched his academic career in 1995 as an assistant professor in the Department of Mechanical and Aerospace Engineering in the College of Engineering at Ohio State University. He became an associate professor in 2000 and a professor in 2004. He began serving as the college’s associate dean for research in 2005 and also led the university’s Institute for Energy and the Environment. From 2008 to 2011, Washington served as interim dean of the Ohio State engineering school, one of the largest in the country.

An accomplished researcher and educator, Washington specializes in dynamic systems, with an emphasis in the modeling and control of smart material structures and systems. He is the author of more than 160 technical publications in journals, edited volumes, and conference proceedings. At Ohio State, Washington received the Alumni Award for Distinguished Teaching, the Harrison Faculty Award for Excellence in Engineering Education, and the Lumley Research Award. He also received the National Science Foundation (NSF) Faculty Early Career Development (CAREER) Award. Washington has conducted research for NSF, NASA, General Motors, the Air Force Research Laboratory, and the U.S. Army Research Office, among others.

A first-generation college graduate, Washington is a New York City native who attended high school in North Carolina. He earned bachelor’s (1989) and master’s degrees (1991) and his PhD (1994), all in mechanical engineering, at North Carolina State University. He is a member of the NC State Engineering Foundation’s Board of Directors.