Learn more about the Schar School 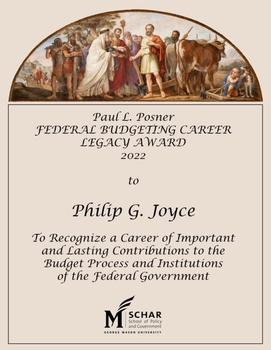 Philip Joyce, senior associate dean and professor of public policy in the University of Maryland School of Public Policy, is the recipient of the 2022 Paul L. Posner Federal Budgeting Career Legacy Award. Joyce received the award at the spring lunch of alumni of the Office of Management & Budget and the Bureau of the Budget.

The award, presented for the eighth time, recognizes those who over a career have made an important and lasting contribution to the federal government’s budget process and institutions and demonstrated high personal integrity and dedication to the public service.

Presenting the award, former OMB and House Budget Committee chief economist Joe Minarik said, “Phil Joyce personifies the standards set for those receiving this award. He has had a distinguished career both as a budget practitioner and as a scholar and teacher of the federal budget process. He literally wrote the book on the Congressional Budget Office.”

The Posner award is named for the late Professor Paul L. Posner, who served as director of the Schar School of Policy and Government’s Master’s in Public Administration program at George Mason University. He was former managing director for strategic issues at the U.S. General Accounting Office for 14 years; he worked at GAO for 30 years. He died in July 2017, at age 70.

The award was made possible by a grant to Mason by alumni of the Bureau of the Budget, a group now merged with the Office of Management and Budget Alumni Association. It is administered by the Schar School’s Center on Nonprofits, Philanthropy, and Social Enterprise.

Philip Joyce’s teaching and research interests include public budgeting, performance measurement, and intergovernmental relations. He is the author of The Congressional Budget Office: Honest Numbers, Power, and Policymaking (Georgetown University Press, 2011), and coauthor of two books—Government Performance: Why Management Matters (Johns Hopkins, 2003) and Public Budgeting Systems, 9th Edition (Jones and Bartlett, 2013). He is the author of more than 50 other publications (including book chapters and articles), appearing in outlets such as the Public Administration Review, Public Budgeting & Finance, Journal of Policy Analysis and Management, Administration and Society, and the Handbook of Government Budgeting. Joyce is a former editor of the journal Public Budgeting & Finance and a past president of the American Association for Budget and Program Analysts.  Joyce has been on the faculty of The George Washington University, the Maxwell School of Citizenship and Public Affairs at Syracuse University and the University of Kentucky.